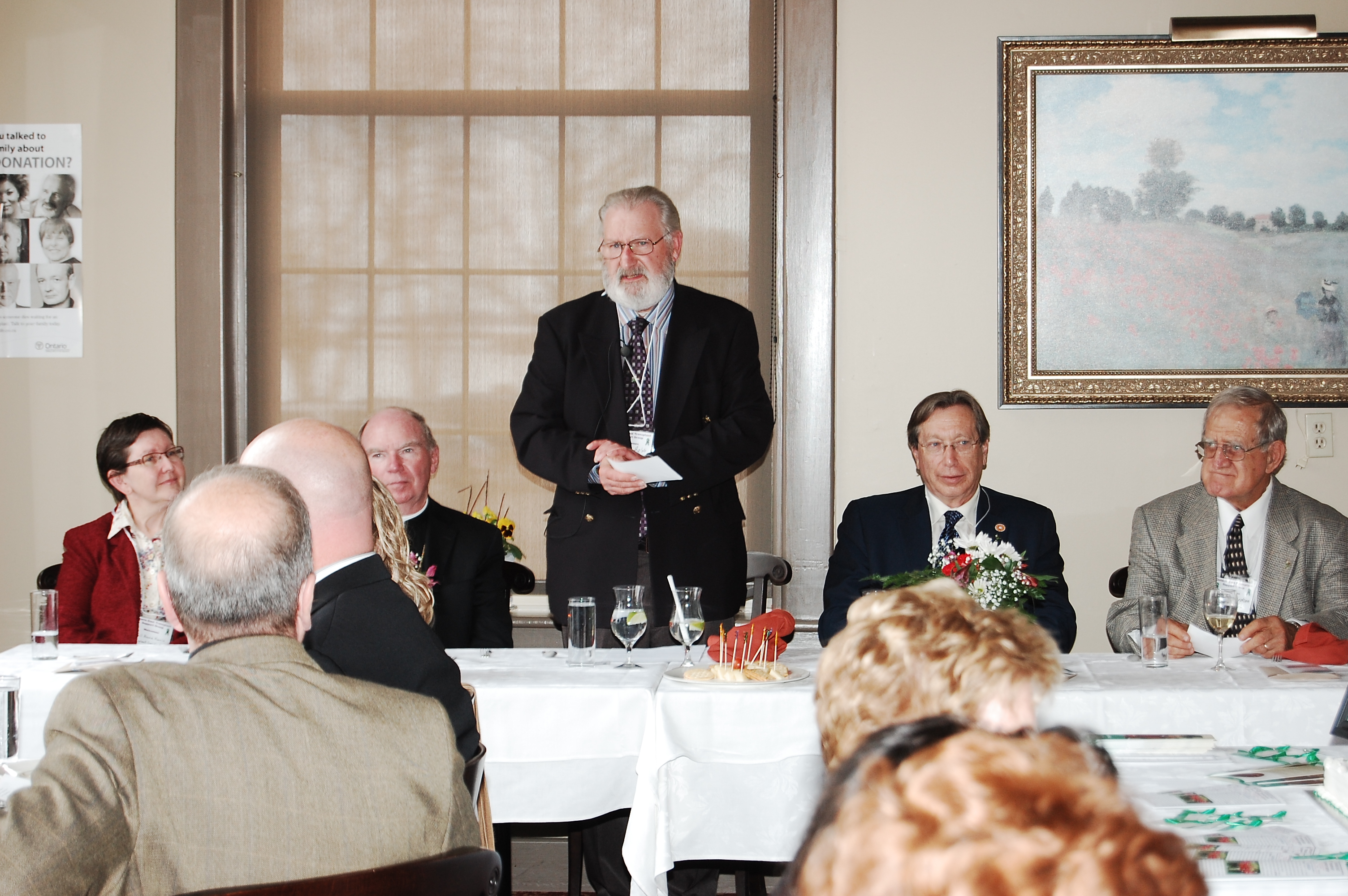 On November 27, 2000, a fit Pastor Ian Robb entered Oshawa Lakeridge Hospital, Ontario, Canada for "day surgery" to remove his gall bladder. Within 24 hours, Ian was back in the emergency room with severe pains. He was admitted. After approximately five to seven days, Ian was transferred to the Intensive Care Unit, where he was intubated while critical, and his family was given the ARDS diagnosis (Acute Respiratory Distress Syndrome) ; ten days later, he was given a tracheotomy. Ian spent eight weeks in the ICU, where he was treated with approximately thirty different antibiotic drugs, as well as steroids which some think helps prevent damage to other vital organs. Ian had become septic, probably due to complications with the gall bladder operation. At one point Ian went without food for almost a week after his nasal feeder tube blocked. Weight continued to tumble and Ian was so de-conditioned that he was unable to stand.

Ian was transferred to another ward, where he spent another four weeks. During this time, Ian was placed in isolation for 2 weeks when one of the physicians suspected his condition might have been caused by exposure to Hanta Virus. He then spend two weeks in rehab until he suffered a hydro-pneumothorax, putting him back into a regular hospital ward for another two weeks. Then, Ian again went back to rehab for another five weeks. (The roller-coaster ride that we know is ARDS)

On day of discharge from the hospital on May 4, 2001, Ian weighed 145 pounds; he was 60 pounds less then when entered the hospital over five months earlier. When Ian left the hospital in a wheelchair, he was on oxygen twenty-four hours a day, seven days a week. Post Traumatic Stress was a term which Ian and wife came to know quite intimately in the months following hospitalization and discharge. (Ian had been an active fifty-seven year old boater, 5 handicap golfer, enthusiastic walker, and traveled extensively. Ian ministered at two churches prior to having ARDS.)

However, after his experience with ARDS, Ian's and his wife's life dramatically changed. Ian ended up on long-term disability, requiring oxygen 24/7 but was committed to weaning himself from the supplementary oxygen. Ian tried to build muscle and stamina, which was a constant challenge. Ian's motto always was "Remember, every set back is a set up for a come back."

And as Ian's story continues to unfold, he says that those last few words, "Remember...." are prophetic words, although Ian did not realize it at the time of writing.

The story unfolds: Ian continued, week by week, to grow a little stronger, and commenced a course of physical rehab, which helped greatly. During the fall of 2002, still on oxygen 24/7, Ian continued working out 3 days a week at the rehab center in Kingston, Ontario, Canada, which is about an hour from his home. Then one day, progress halted. And in the space of a few short days, Ian felt worse than before. He could not exercise to the same extent. Extensive tests and a scan were ordered, and a few days later, Ian was given the bad news. He now had Idiopathic Pulmonary Fibrosis, which was advancing rapidly. His life expectancy was very short, and his only hope of living was to apply for, and hopefully receive, a lung transplant.

Once that information had been mentally processed, Ian considered the options; he thought about living and he thought about dying, and felt somehow that this was not yet his time. Ian thought, "Surely, if I go ahead with the operation and survive, then I will know that God has more for me to do in this world." His wife and family gave their total support to whatever choice was made, and Ian moved forward with the application for transplant.

Toronto General Hospital is one of the leading centers in the world for transplant surgery, and in particular, lung transplants. The application process is long and involves a week long stay in hospital for a multitude of tests, scans, consultations as well as other visits, making the process, one that is not entered into lightly. The information which is provided to the candidates leaves them in no doubt as to the nature of transplantation, and that is as it should be. Many months later, Ian learned that the panel of health specialists who review each and every application, had approved him. He was then placed on a further course of rehab which he attended three times a week in the Toronto hospital. Ian was assigned an electronic beeper and told to carry it at all times. If and when it sounded, he was to arrive at the hospital within two and a half hours. Ian had no idea if or when he would be called, as this depended on the availability of suitable organs for transplant, depended on a match, depended on his place in the priority list of candidates.

One evening at 6:00 p.m. the call came, and Ian and his wife raced to Toronto, their minds in a haze of thoughts of so many things. "Was this the last time we would see each other? Would the operation be successful? How would his wife manage on her own? What about our family? How would they handle it?" They arrived in record time, the highway patrol would not have been impressed with his wife's somewhat 'urgent' driving, only to be told several hours later that the transplant could not go ahead. (They had been warned that this does happen and is unavoidable) They returned home at 1:30 a.m., the conversation muted, and their minds again confused with what had transpired, figuring that "it was just not meant to be."

One month later, strangely enough, also at 6:00 p.m. the call came again, and they repeated the journey, although this time a little slower, a little wiser. The conversation during the journey in the car was strangely hushed, as everything that needed to be said between a couple who loved each other deeply, had already been said so many times. The questions had been covered, the prayers had been spoken, the love that bound them together remaining unspoken, yet so strong they could touch it and know it. Four hours later, Ian went into surgery, which, he was informed some weeks later, lasted twelve hours. Complications caused an eight week stay in ICU which was less than enjoyable, yet due to the dedication of nurses and doctors, Ian recovered.

Learning to walk for the second time in three years (the most difficult thing he had ever done)....... this was beginning to become a nasty habit for Ian, and yet, it was the walking activity that brought Ian's strength back sufficiently to allow him to leave hospital, WALKING, and commence a three month period of intensive rehab.

The first time Ian realized he could breathe without the need for an oxygen tube in his nose was quite a revelation, and as his confidence returned during the next three weeks or so, Ian dispensed with any supplementary oxygen assistance....the first time in years! According to Ian, "My miracle was now for real."

Time has passed and Ian is now four years post transplant. Exercise forms a part of the daily routine of his life and it is not uncommon to see him returning from a 5 mile cycle or a 3 mile walk. Strength has returned to a body which was badly debilitated following 3 years of illness. As the muscles were rebuilt, the range of activities that could be undertaken widened dramatically. Pulmonary function improved continuously and allowed Ian to return to golfing and a 7 handicap as well as being a competitor in the 2006 Canadian Transplant Games in Edmonton.

Being imuno-suppressed is in itself a "lifestyle," and takes some getting used to. There are certain do's and don'ts which have to be learned, however these are easily handled. The support given by the Toronto General Hospital's Transplant Department is ongoing and regular phone contact with a coordinator ensures the optimum recovery. In addition, both PRE-Transplant and POST-Transplant, it is vitally important to have access to mentoring from those people who have traveled this road before you and can offer guidance gained through their own personal experience. That is why Ian, in association with his transplant friends, formed:

There is no need or reason for anyone to feel alone as they embark on their own journey of healing or acceptance of their condition when transplant may or may not be an option for them. The OETSG exists to provide support and mentoring to both donor family members and those who are pre and post organ transplant. It also provides presentations on giving The Gift of Life, promoting organ donation as the greatest gift one person can give to another.

Ian began this by saying: "Remember, every set back is a set up for a come back."

He would like to add these words that kept him going over the weeks of recovery in hospital:

"The task ahead of us is never as great as the Power behind us."